Book 1 in The Earthborn Wars

Welkin Quinn has always dreamed of setting foot on Earth. As an elite Skyborn teenager aboard a transport ship destined for Tau Ceti, all he knows of his home planet is what he has learned from the Elders as well as from a wealth of records and artifacts archived in the ship’s memory. The creatures known as the Earthborn-brutish – survivors of the devastation that laid waste to Earth – are an uncivilized and technologically primitive race in many ways indistinguishable from savages.

Yet even though Welkin was born on The Colony, Earth is still. . . home.

When The Colony is forced to abort its mission to colonize and Tau Ceti and crash lands on Earth, he will finally have a chance to experience Earth – and the Earthborn – firsthand. Assigned to a reconnaissance team to explore The Colony’s perimeter, however, Welkin is ambushed by a murderous gang of feral Earthborn known as Jabbers. Welkin is rescued by Sarah, an Earthborn hardly older than himself and a leader of group of young survivors who are trying to unite other displaced families in a war against the Jabbers.

No question Skyborn Welkin needs the help of these Earthborn to survive. The real question is: Why on earth would they need him?

I insist that if you read only one science fiction book in your life, read The Earthborn.

... certainly worthy of sitting on the same shelf with early Heinlein and Norton.

The Earthborn manages to avoid the mundane by fast-paced narrative and believable young characters, a combination which will clearly appeal to his intended read audience.

This is a book which can be read on a number of levels: as a challenging social comment or as a gripping adventure story. Here’s hoping that the sequel is not long in coming.

The story is fast paced and reminiscent of John Marsden’s Tomorrow series. This is a worthy edition to a school library collection. 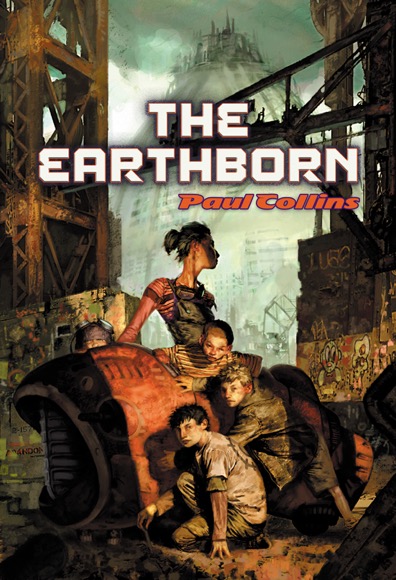 The Earthborn is available for purchase in Paul Collins' online book shop.